Hootie taught me everything there is to know about Reinvention 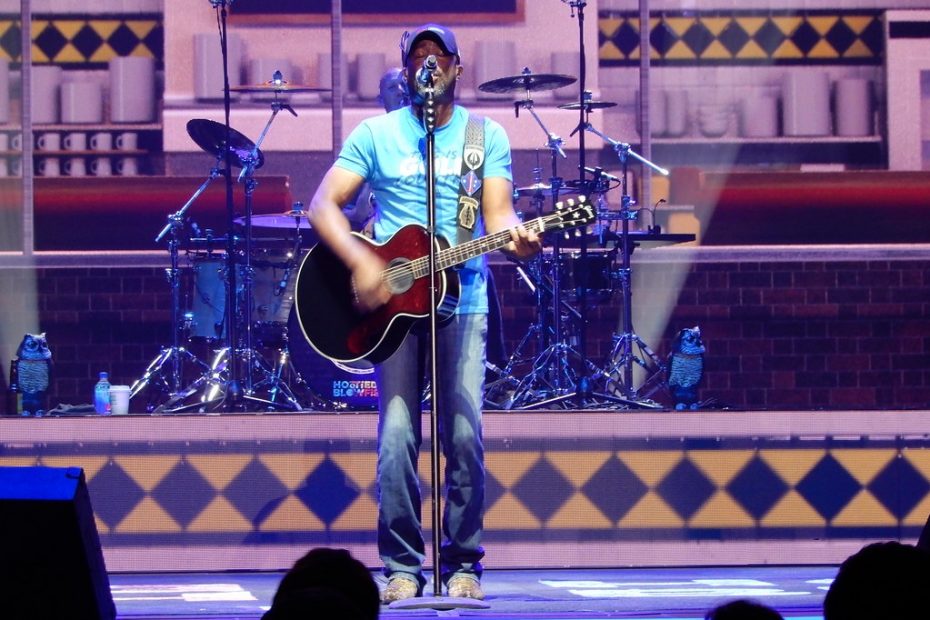 For years, they played bars and college parties, hoping to catch a break.

According to the band, they received five thousand rejection letters before they landed a record deal.

But then, Hootie & the Blowfish caught a break.

In August of 1993, they signed with Atlantic Records. Eleven months later, they released their debut album, Cracked Rear View.

Then, they caught another break.

On September 2, 1994, David Letterman invited the band onto The Late Show to play “Hold my Hand.”

Suddenly, the world couldn’t get enough of the group.

Overnight, Hootie & the Blowfish became rock superstars, and for the next eighteen months, there was no bigger band in music.

When Cracked Rear View broke through, you couldn’t avoid it.

In the mid-90s, people still bought records, radio mattered, MTV was popular, and the Internet was barely in its infancy.

As a result, songs like “Hold My Hand,” “Let Her Cry,” “Only Wanna Be With You,” and “Time” were everywhere.

In 1995, its first full year on the market, Cracked sold seven million copies in the U.S., almost fifty percent more than the next most popular album (TLC’s Crazysexycool).

The album continued to sell, spending 129 weeks on the Billboard 200.

Oh, and for good measure, Hootie & the Blowfish won the 1995 GRAMMY awards for Best New Artist and Best Pop Performance by a Duo or Group with Vocal.

And then… the world moved on.

In some respects, Hootie was a victim of their own success. They were so popular that it became uncool to like them.

In other ways, though, their descent was surprising.

Their sophomore album, Fairweather Johnson, was a solid second effort. Some thought it was better than Cracked Rear View.

And it wasn’t like Hootie wasn’t working hard. In fact, they consistently released albums and toured into the 2000s.

And yet, the magic that had catapulted Hootie to superstardom was gone.

Here’s a chart that says it all:

For most bands, that’d be the end of an amazing career.

Tour for a while.

Make a Christmas album or two.

And then ride off into the sunset.

Except that’s not where the story ends.

If you’ve listened to country music at any point in the last decade, chances are you’ve heard a lot of Darius Rucker songs. Like, a lot.

Darius Rucker, the lead singer of Hootie & the Blowfish – and the man most people wrongly assumed was ‘Hootie’ – became a major country music star in the late 2000s.

Check out some of his hits:

It’s worth pausing on how big of an accomplishment this is.

Many artists switch genres, particularly early in their career. Katy Perry released a Christian rock album before “I Kissed a Girl.” Skrillex was the lead singer of a punk-emo band before becoming a wold-famous DJ.

And others, like The Beatles, David Bowie, Paul Simon, or Radiohead famously experimented with new sounds throughout their career.

There are, however, virtually no established artists who successfully moved into country music.

Sure, Taylor Swift and Carried Underwood moved out of country music and into pop music.

But to go the other way? Nearly unheard of.

So with that in mind, take a look at Darius Rucker’s legendary second act:

Rucker’s country debut, Learn to Live, came out in 2008. The album spent 112 weeks on the Billboard 200 and earned him the Country Music Award for Best New Artist.

His follow-ups fared similarly well, including his 2013 cover of “Wagon Wheel” which went 9X Platinum and earned him another GRAMMY, this time for Best Country Solo Performance.

So what happened? How did he do it?

Was Darius Rucker’s reinvention just a happy accident or is there more behind the curtain?

As I wrote in my last piece, “Congrats! You’ve Been Promoted to Chief Reinvention Officer,” we all have opportunities – some voluntary, some not – to dramatically change our lives.

For me, “The Reinvention of Darius Rucker” contains everything you or your organization need to know about transformative change.

Here’s what I mean: If you pay close attention, Rucker did five things exceptionally well. By focusing on these same five “Reinvention Factors,” anyone can greatly increase their chances of success.

Let’s go through them one by one.

Do something deeply meaningful to you

Authenticity is paramount in country music. As I wrote before, very few artists successfully move into the genre.

But believe it or not, part of Darius Rucker always was country.

As he told Billboard magazine, “I’ve always been a fan of country music, and when Radney [Foster] came along [in 1992] was when I first started saying, ‘I want to sing that music some day.’”

The result? As Billboard noted, “There’s a sense of purpose that makes Rucker feel like a member of the country family, rather than calculating interloper.”

When you genuinely care about something, you almost always approach it differently. You work harder. You’re less likely to quit. You’re more willing to make painful changes. And you’re a lot more likely to bring others along for the ride.

Rucker did all of these things because he loved country music. And in return, he made arguably one of the greatest leaps in music history.

Build around your superpowers

It certainly doesn’t hurt that Darius Rucker has a great voice and can write catchy songs.

But then again, lots of folks can sing and write but don’t become stars.

So what was the difference? Darius Rucker brought a level of grit and humility that turned them into proper superpowers.

Remember how hard Hootie & the Blowfish worked to get their first break?

As Rucker told CMT, “We have over 5,000 rejection letters from when we were trying to get a record deal. And for me, the word, ‘No,’ especially in our business, it just means go ask somebody else.”

But that drive and resilience was further paired with a deep sense of humility.

As Rucker told Rolling Stone, “I said to my label when we went in, ‘I want to do everything the new guy does.’ I went to 120 radio stations — I mean, five days a week, four or five stations a day.”

Rucker has talked extensively about the importance of personally taking his record to DJs. During those meetings, his love and knowledge of country music came through. One-by-one, he won over the industry’s gatekeepers, despite the fact that many said they would never play his music. And then, for good measure, he made a point to thank those same DJs when he won the CMA award.

Rolling Stone shares another telling anecdote: “When the multiplatinum rock headliner was invited to do the lowly 25-minute opening slot on a triple-bill tour with up-and-comers Dierks Bentley and Brad Pais­ley in 2008, he signed right up.”

We all like to think we’re hard workers, but be honest: If you’d already sold 30 million records how many of these things would you have been willing to do?

That’s not to suggest everyone’s superpowers will be the same – quite the opposite! But transformative change requires each of us to figure out what we’re truly, uniquely good at and then build a strategy around those strengths.

As Peter Drucker, the famous management thinker said, “The task of leadership is to create an alignment of strengths in ways that make weaknesses irrelevant.”

Invite others into your dream

More often than not, individuals and organization try to take on big challenges alone.

Other times, we keep our dreams to ourselves because we’re afraid. Afraid of being embarrassed. Afraid someone will take our idea. Afraid that if we say something out loud we’ll actually have to follow through.

Darius Rucker’s took a different approach. He invited people into his second act.

As Rucker told The Oklahoman, after the release of Foster’s 1992 album he “started telling anybody that’d listen, ‘I’m gonna make a country record someday.'” He told himself, his manager, his friends, and everyone he knew in Nashville. And he invited them in fourteen years before he sat down to write Learn to Live.

Fast-forward to 2008 and Rucker continued to invite others into the process.

As part of Hootie & the Blowfish, Rucker talks about how he used to write songs alone. When he moved to country, however, he started co-writing songs more often, which helped him become a more disciplined writer.

As he told American Songwriter, “I was that guy who thought you always had to be inspired to write, so I wasn’t a prolific writer. I didn’t sit down and make myself write songs. When you get to Nashville, you realize that songwriting is not just an art here, it’s a business.” By bringing others into the process, he became both a better writer and a more productive one.

And again, when Rucker ultimately released Learn to Live he personally invited DJs – skeptics and all – into the process. He asked them to listen to his music. He encouraged them to keep an open mind. He won them over. And then they turned around and did the same with their fans.

So what’s the takeaway? No matter what we’re trying to accomplish, we all need outsiders to help us recognize our blind spots, stay motivated, provide accountability, and open a few doors along the way.

When Cracked Rear View was released in 1994, rock music was already dying.

Sure, there’ve been great rock bands since the 1990s, but as a genre, rock music has been on rocket ship to irrelevancy.

So if rock music – Hootie & the Blowfish’s home – was being eclipsed, what was on the rise?

Consciously or not, Darius Rucker changed lanes at the right time. He moved from a genre on the decline to one in its ascendancy and benefitted tremendously.

As Rucker recently pointed out: “The only place in music for the singer-songwriter right now is country music.”

Importantly, though, it’s not enough to jump on the latest or hottest trend.

Had Darius Rucker moved to country simply because it was popular he would have been accused of being the “calculating interloper.” Similarly, there’s reason to believe that his superpowers were particularly well-suited to the close-knit country music community.

Darius Rucker’s metamorphosis has all the marks of a great entrepreneurial venture. He was agile, opportunistic, and responsive to market feedback.

Here are a few examples:

For the rest of us trying to “change genres” – whether as individuals, organizations, or communities – there’s value in thinking like an entrepreneur.

The “lean start-up” mindset of continued experimentation and adaptability can help us to move faster, avoid costly mistakes, and ultimately produce better results.

The next time you’re facing a big change, ask yourself… What would Hootie do?

Just kidding, although that would probably make you laugh.

Instead, I’d encourage you to reflect on the five “Reinvention Factors” highlighted by Darius Rucker’s story.

What’s the best way to do this? Simply ask yourself the following questions:

If you can answer yes to all those questions, then you or your organization are set up for success.